We have a bonus in that New Year’s Day has fallen on a Sunday, giving us a bank holiday Monday; an extra day before life gets back to normal.

We took down the Christmas decorations on 29th December – oh horrors, we flouted the 12th night tradition! However, it’s easy to forget that these days, the tree goes up much earlier than it used to, and had been harbouring dust and dog hair for nearly a month. So, down it came with spring-cleaning at the same time. We’d booked a little New Years Eve golfing and partying getaway in Devon with some friends. I didn’t want to return home on New Year’s Day to the tree-downing, house-cleaning scenario!

On New Year’s Day morning, we arrived home from Devon. Trouble was, it rained all day and was cold and miserable. Never mind – after all the partying, rushing around, cooking, hosting friends and relatives and making efforts to be extra-nice to everyone, it was nice to be at home on our own in front of the telly.

2nd January dawned bright and cold. His nibs nipped off to play golf, and I made my first list of 2017 (just call me list-woman). With the bonus extra day, it’s good to have time to reflect on the year that’s gone and the one to come. I don’t do resolutions, so they were not on my list. Losing weight, eating better, getting more exercise? I was doing all these before Christmas, so I was hoping to pick up where I left off.

I was a bit worried that I’d been lazing around, eating and drinking for so long over Christmas, that I wouldn’t be able to get back into my routine. So I dragged myself away from the PC, pulled on my boots, grabbed my sunglasses and headed for the door.

A nice, peaceful walk along the seafront should blow the cobwebs away, I thought. I could have a think about what the new year might bring work-wise, and make some plans for the year. It would also put a few steps on my fitbit. They’ve been sadly lacking over Christmas.

I parked on the Beach Road at the south end of Weston seafront – one of the few places in town where there’s no charge. As I walked past the flats, I thought back to when the building was the Royal Hospital.

When we knew we were moving to the Weston-super-Mare area back in 1989, I looked up hospitals in the area to find a job. There was no internet as such then, no home computers and definitely no smartphones or laptops. I went to the library and looked at a book listing hospitals countrywide. I wrote to the hospitals nearest to RAF Locking on the map; the 2 hospitals in Weston, one in Pill and one in Burnham-on-Sea. For those of you who know Weston, the new hospital had been opened by then, the the 2 old hospitals closed some time before 1989. The library resources were out-of-date.  Luckily, my letter found its way to the chief nurse, and I started my first spell of 10 happy years at Weston General Hospital in early 1990.

As I walked on towards the beach, I came out of the shadows into bright sunshine – what a treat. However, it was freezing! Walk faster, I told myself.

View of the beach

The beach was quite empty. Brean Down was in the distance, with the fort visible on the tip of the penninsula. I walked on past the beach huts which, to the newbie or visitor, may seem like a part of Weston but to me, looked like sheds dropped in a couple of years ago. I remembered when they were in the local news for being blown out of position when it got windy once. It looked like battens had been fixed around them to hold them in position.

Perhaps they could be the answer to the housing shortage?

I don’t think ever walked along this part of Marine parade by myself. It really makes a difference. Usually, I’d be gassing away to my companions and not noticing things around me.

Here’s something I’d never noticed before. A nursing home across the beach lawns from the Marine Parade has what looks like a gazebo on the top, surrounded by an ornate fence.

I wonder what it’s used for?

Now you’d think, after living in Weston for 27 years, I’d know my way around. I thought I did, but a council sign told me different.

Another consequence of that windy day, maybe? Or a New Year’s Eve prank?

I did not know that part of our beach was called Clifton Sands.I guess it’s named after Clifton Road, which is opposite. This bit of the beach seems to have a few rules. The more I read this sign, the more ridiculous it seems! The danger notice at the bottom seems to get a bit lost by the time you’ve worked your way through all the rest.

And since when has the Sea Life Centre been called the Seaquarium?

We went in there once, when the kiddies were small. And I stood underneath it a few years ago, trying to recover after reaching the finish line of the Race for Life beach run. It’s always looked like a bit of a blot on the landscape to me.

Now its new name makes it seem so much more………adventurous……..

Oh dear – I was supposed to be in reflective mode. This walk has turned me into a ranting madwoman! Back to the nostalgia, I think.

Change for the better

Some things have changed for the better. 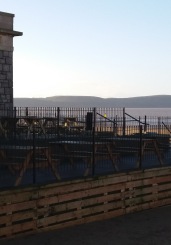 The Grand Atlantic Hotel is still there, and has had numerous facelifts. People love to stay there. My mum and her friends came on a coach trip a couple of years ago and had a lovely time. We sat with them in the foyer and watched the fireworks over the sea – impressive!

The Premier Inn is a modern addition to the seafront, but is popular. I’ve never been there, but friends tell me that the Brewers Fayre restaurant is not bad.

The Marine Parade toilets used to have attendants. They were full of plants and individual touches of the attendants – they attracted many visitors. But times change; they are now a quite nice cafe, with decking and outdoor seating overlooking the pier. The new toilets are a bit….boring, but clean. And 20 pence to spend a penny!

We were talking about traditions at the start of today’s tale. Well, walking on Weston seafront is a tradition for many on New Year’s Day. The weather must have delayed people yesterday.

As I arrived at the pier, I could see the world and his wife strolling in the sunshine with every manner of woolly hat and winter coat in evidence.

The traffic had started to build up. On the other side of the pier, there were loads of dogs walking their owners on the beach.

I found myself thinking about all the times we’d done this walk in the past, and the forms of transport we’d used. The year we arrived, it was a buggy and a trike, then 2 trikes, skateboards, scooters and new trainers.

There was one year where we all cycled along. Another time, all 4 of us had roller blades for Christmas and came to try them out – I wish I’d had a smartphone back then to take pictures, because I remember it being hilarious! (and much bumpier than it looked).

There was one year where the beach was covered in snow, which is very unusual for Weston. And another where it was so foggy that you could hear lots of people on the beach, but could not see them.

On the way back

I walked as far as the Winter Gardens – currently behind hoarding, with the dome peeping over the top – then turned back. It’s funny how different Marine Parade looked with the sun in front of me instead of behind.

It might be over 25 years since we joined in the tradition, but families were still doing exactly the same. It was just the technology that had changed.

There were babies in buggies, children on ‘hover’ boards, scooters – some with a motor and a seat, roller skates and boots with wheels in. There were runners and cyclists, some of them professional in shirts proclaiming their experience in past events, others puffing their way through the first (and maybe their last) day of their New Year’s resolution.

Hopefully, the ambulance crew just stopped to pick up a cup of tea, unless someone had fallen off their wheels!

It’s obviously such a feelgood activity to do on a day where people have some spare time and the weather is bright – a prelude to a Happy New Year.

Here are a few pictures of wheeled Westonites enjoying Weston

Thanks for sticking with it – you’ve reached the end for this week! 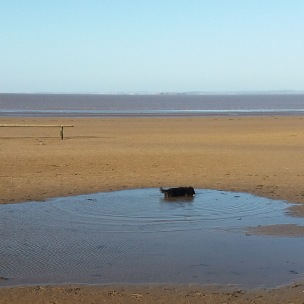 Here’s wishing everyone a happy and healthy 2017.

4 thoughts on “A prelude to a Happy New Year”