I wanted something a bit different  for Kimtime this week. I fancied making something – but what?

I still need 10,000 steps today to keep my hip moving……… but I’ve done a fair bit over that over the last couple of months and fancy a change.

I like cooking, usually for dinner parties, but I wanted to make something with a bit of an artistic element to it. I couldn’t immediately bring to mind anything except a nicely-iced cake, but cake equals calories, so I think that’s off the menu! 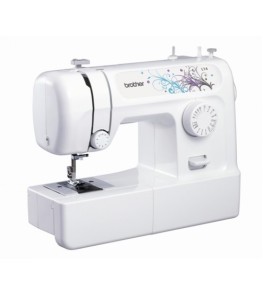 I made a couple of table runners for a friend’s Burns Night celebration last week, which re-started the sewing bug for me. I will be making a couple of miles of bunting for a family wedding once I’ve found the right fabric, but maybe something to make in-between times?

I had a rummage through my scrap box and came up with a couple of metres of unused stretch cotton fabric. Ah – now I remember way back, buying this with a pattern, but finding that the fabric needed more stretch, so the project was abandoned.

I had another look. The fabric seems suitable, even if the pattern is a little…. floral. So, this is it – Today’s Kimtime activity.

I still need steps, though, so an A to B journey scenario comes to mind. Read on to find out what I’ve got planned!

Well now, if you are wallpapering you have to prepare the walls. If you’re cooking, it’s best to get all your ingredients first. I didn’t really have prep to do as such, so I spent half an hour on Facebook, Twitter, etc before I realised that the pattern needed cutting out.

Bailey gave me a hand, but tired himself out quite quickly…..

So, I carried on without him. It didn’t take long before I’d cut out the pattern, pinned it onto the fabric and cut out the pieces. 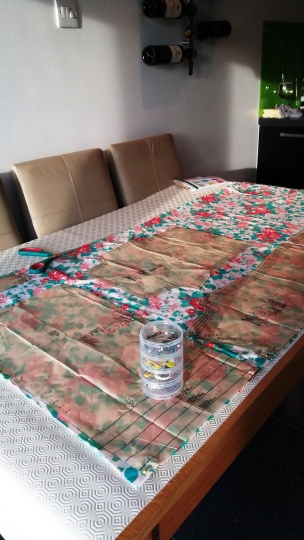 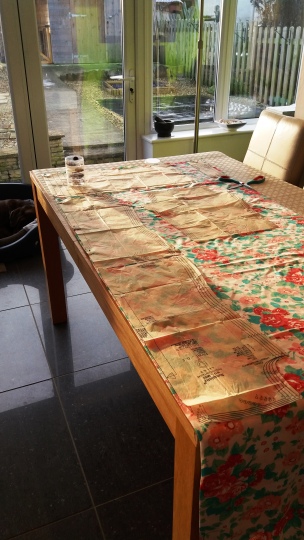 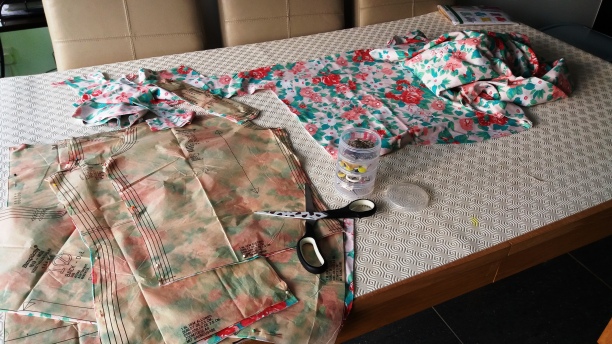 As I worked, I was thinking that the fabric was more like the stuff you’d used for making pyjamas. I had loads left – maybe I’d make some! It did leave a problem though, in that I was intending to wear the new item on holiday. I’d probably look like I was wearing my jammies on the beach…. 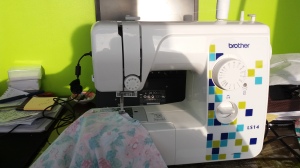 Next step – sewing the bits together.

I shoved my laptop to the back of the desk and cleared a spot for my sewing machine. Off we go!

I sewed along merrily, the sun on my back and Popmaster on the radio.

Rats! Last time I did sleeves, I made the same mistake. And it was a double row of stitching, so it took a lot longer to undo than it did to create. The bit they show you on the Great British Sewing Bee of a contestant undoing stitches for about 10 seconds definitely does not reflect reality!

To cut a long story short, I undid the sleeve and re-attached it, and completed the rest of the garment in just over an hour. Amazing!

Here’s the completed item. I’m really pleased with it, and it doesn’t look like pyjamas at all!

But what about the steps?

So, I had a very pleasant morning sewing, but it didn’t solve the problem of getting 10,000 steps today. I’d done a few whilst buzzing up and down the kitchen, but not nearly enough.

So here’s the thing. We are off to see Lalaland later – the early evening showing – followed by a nice Indian meal to celebrate Chinese New Year.

I’ve decided I’ll walk to town, which takes at least an hour and probably about 8,000 steps. I hope it doesn’t rain….

So now I’ve gotta go and get ready. Wish me luck!

Thanks for reading. Comments are welcome.

See you next week!