I’ve decided this week that I must walk. Last week, I sewed, which was great and really satisfying, but it didn’t get me to 10,000 steps. I’m not obsessed – really!

I was browsing for ideas on where to go, and came across a lady called Ruth Livingstone who is walking the coast of the UK and blogging about it. She’s been doing it for 6 years and has walked 2500 miles! In 2014 she walked some of the places I’ve already been, such as Middle Hope, Brean Down and Woodspring Priory.

Ruth’s rules include similar things to mine, such as not listening to music – just enjoying being in the place I am. I also try not to plan every detail. I want to be surprised by things around me, so I usually go in the vague direction of where I’ve planned to go, finding my way as I go along.

Ruth also walked the coast around Portishead, somewhere local I haven’t been so far. Decision made – let’s go there.

So there I was, haring up the M5 at 8.30 in the morning; just like being at work! I haven’t actually done this route at this time of day for about a year, as I’ve been working in London. I expected it to be busier. Everyone else must be off work on Fridays too…

For those of you that know this stretch of the motorway, there is something that I’ve always been curious about. Go past junction 20, going north to the top of Clevedon Hill. Then there is a stretch of motorway where the southbound side is about 50 metres higher than the northbound side. There’s a great view of the Bristol channel on the left, with Portishead and Avonmouth in the distance –  in the mist this morning.

However, if you glance to your right once 4 lanes become 3 again, there is a house in the woodland beneath the southbound carriageway. Who lives there, so close to the traffic? How do you get there?

If you know, please tell me!

As I approached the High Street, I caught site of  Antonio’s Italian Restaurant. Last time I was here, we had a lovely, traditional Italian meal with friends, although it was totally umplanned; I’d already booked a table at another restaurant,  as we are in the midst of helping our friend eat a madras in every Indian restaurant in the country, and probably the world (I kid you not!)

Anyway, we walked up and down Portishead High Street for ages, looking for the restaurant, without success. It was a busy summer Saturday night and every restaurant was full. Eventually, I realised my fatal error – I’d booked a restaurant in Clevedon, and driven to Portishead by mistake…..

I drove along beside Portishead boating lake, remembering all the times we came here when the kiddies were little. At the end of the road was Portishead Lido.

I have a feeling it was closed down when we used to come here, then one of the DIY programmes renovated it and re-opened it. Today, it looks like the cafe is used (but closed this morning), and the pool is closed for the winter.

There’s a really good view of Portishead from here, and to the left of the Lido is a path with some steps to the top of a slope. I knew Battery Point was somewhere in the vicinity – could this be it? 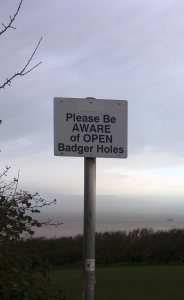 I headed for the steps.

The sign at the top warned of open badger holes.

More than the cafe was, I thought to myself!

There were lots of dogs about. I should have swapped cars with the old fella and brought the boys with me, but Bailey is still suffering with his sore leg, so they are better off snoozing at home.

Here’s the view of Battery Point.

There was a commemorative stone at the top of the hill, facing the sea. The memorial said: 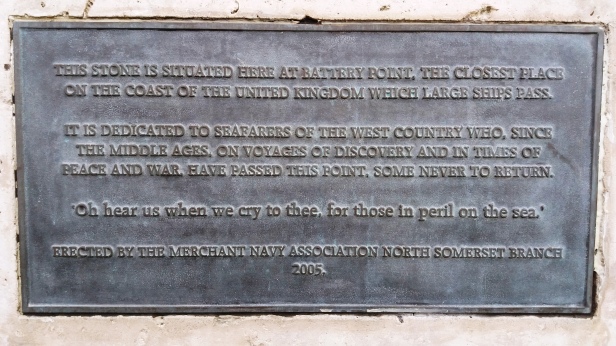 I never knew this was where ships got closest to the land in the UK. I was hoping to see a ship pass, but Friday is obviously also a quiet day at sea!

The structure that looks like a small lighthouse has an open bridge, so I walked along it to have a closer look. It’s actually a foghorn! 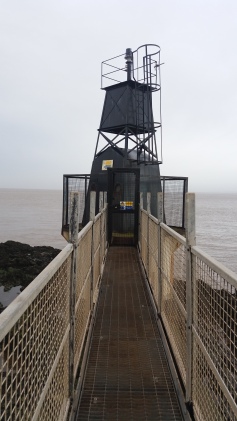 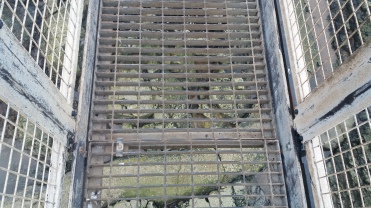 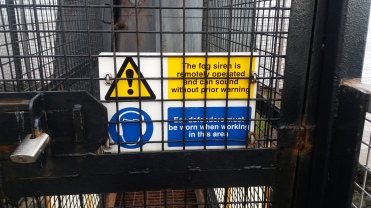 I walked up and along the grassy back looking at the views and trying to get a good picture of the second Severn Crossing  through the mist – and failing miserably. The mist and the brolly kept getting in the way. Dunno about rain; in spite of the mist, it actually looked like it was brightening up.

I spent about half an hour wondering around the nature reserve. It’s very much like the woods near Poets Walk, which I really enjoyed,and Worlebury Woods, which I’m saving for the warmer weather – maybe I’ll team it up with a game of golf!

In the woods, there was a steep slope down to a small inlet, so I slithered my way down to have a look. 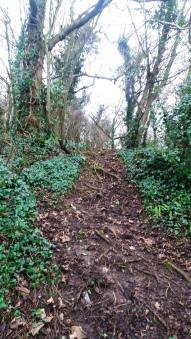 Easier on the way up! 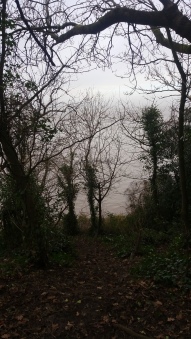 Sea through the trees 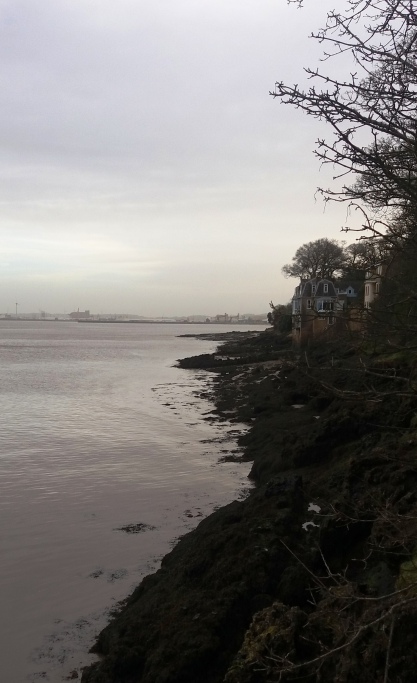 View of Houses on the edge

I struggled my way back to the top, although,surprisingly, it was a bit easier going up than it was getting down. My boots were covered in mud and so muddy on the bottoms that it felt like I’d swapped them for a pair of platforms!

I eventually found my way back to the car, taking in the scenery on the way back, including a view from the back of the house that was at the edge of the water. 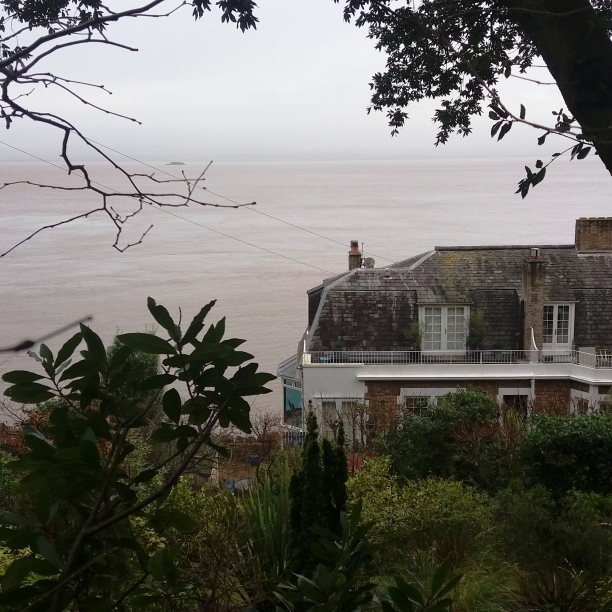 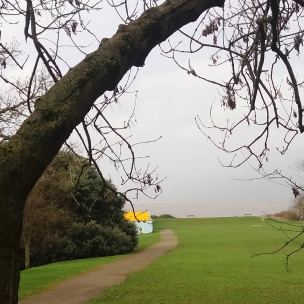 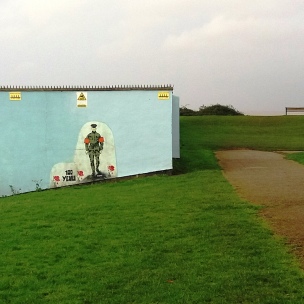 Once I got back to the car, I had the choice of walking along between the cricket pitch/boating lake and the sea, or driving to the other side. I ended up driving, because I didn’t know how far it was, and I was wary of the earlier warning of heavy rain from the old fella.

I discovered shortly after that walking both ways would have been shorter than driving along the road, but hey-ho…. 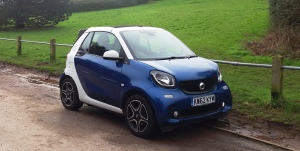 After getting my boots caked in mud, I ended up parking in mud at the other end of the Portishead recreation ground.

There was a field with a gate, so I walked across to get a look at the view back towards Battery Point.

There really wasn’t much to see on the field. The Windmill pub was in the distance, with its amazing lookout over the channel; I went there with my girlie once for a pre-Christmas meal.

Still, as I walked back across the wet grass – avoiding the molehills –  it cleaned all the mud off my boots! 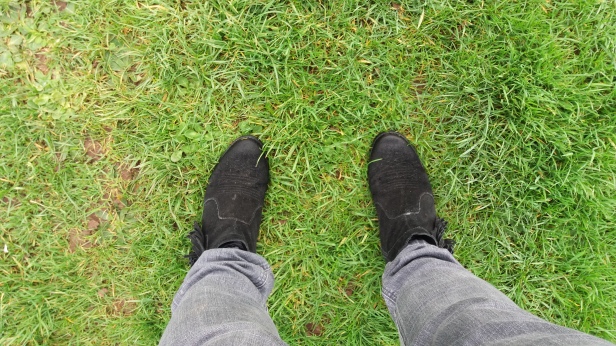 I got back into the car, carried on up the hill, and just followed my nose. It led me to through the flats and houses that pave the way to Portishead  Quays Marina. I hadn’t been here for a couple of years. The houses had bedded in, and it looked like a proper community had formed, with people walking dogs, couples with babies in buggies and loads of boats in the marina.

Last time we were here, we walked all the way alongside the side of the marina that was still in development, only to find that the bridge was closed and we could not cross to the other side, so we had to walk all the way back. I was in heels, and not best pleased!

It’s all finished now, with the locks and bridges in use. 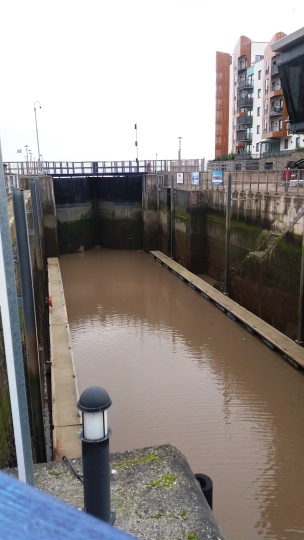 Lock at the marina 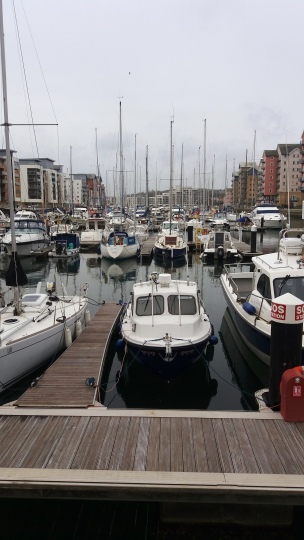 View of the boats 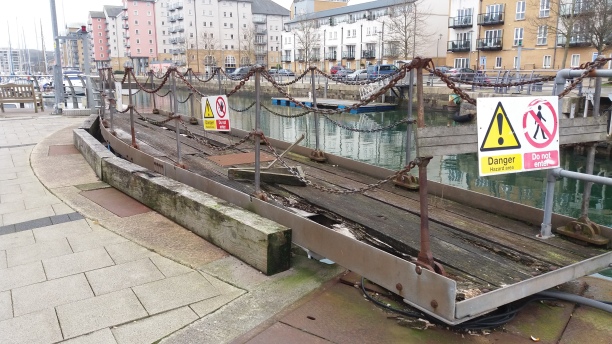 The old bridge was on the side of the quay. No wonder we couldn’t use it last time we were here!

I spotted a Costa from the car, so walked along by the quay, crossed the bridge and went for a coffee, with the intention of sitting and appreciating the view. That was until 5 minutes later, when the heavens opened. Typical – after carrying a large golf brolly here, there and everywhere, I’d given up and left it in the car… 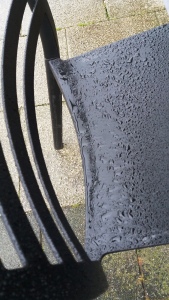 It was a good job there was no-one sat outside, as the seats were soaked in no time. So, I ended up getting wet in the end, just by walking back to the car.

As I was not far from Bristol, I decided on a visit to Fabricland to address my sewing urge (and a visit to Primark, just because I could!) then wended my merry way along the A370 to check out progress with the new road that leads to the A38.

So that’s it for this week – hope you enjoyed it as much as I did.

As for my steps, it just goes to show that when you go here, there and everywhere, the steps look after themselves! 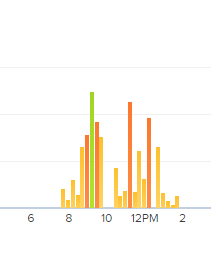 5 thoughts on “Here, there and everywhere!”