Today’s blog is a day late; let me explain.

I knew the weather was going to be bad on Friday this week, so I had in mind to do something on Saturday instead.

First of all, Friday…

I woke up to drizzling, miserable rain on Friday morning, which went on to last all day. I hadn’t slept very well, so I had a bit of a lie-in whilst the other half got wet walking the dogs. Good plan!

Then I slobbed around in my pjs for most of the day, doing a jigsaw then snuggled up in a blanket, watching a film. I dressed only to walk the dogs at teatime, between episodes of rain, luckily. Then, rather than cooking the tea, it was takeaway….

As you might have guessed, this had a bit of a negative impact on my steps:

So, today, I was determined to get a bit of exercise. The weather was due to improve – maybe even be sunny – and after a day doing nothing, I was raring to go. I was awake early and pondered the ceiling for a while. We have a projector clock which often looks upside down to me, so creates unusual times 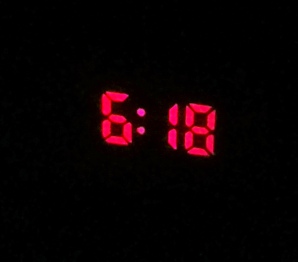 The old fella can’t see the difference, but it keeps me amused for ….minutes!

Perhaps this is the alternative Kimtime?

So, what are we doing today?

Have you seen The Great Pottery Throwdown on BBC1? It’s brilliant! Amateur potters make wild and wonderful creations out of clay, using all sorts of materials and techniques. The format is like the Great British Bake Off, except that the output is inedible.

Well, it’s now on its 2nd series (BBC 2, 21.00 on Thursdays) and I’m hooked. I’m gasping to have a go on the potters wheel and produce a fantastic pot, just like they do.

So I booked a pottery lesson.

How is this going to get me to 10,000 steps, you might be thinking? Well, as the weather looked promising, I decided to get my bike out of mothballs and cycle there and back.

Hi nibbs chased away the spiders and pumped up my tyres, then I was ready to go.

The last time I rode a bike was on holiday in Menorca in September last year.

Unfortunately, Pam didn’t mention that she was not that confident on a bike – in fact, she was proud of the bike she’d bought earlier in the year.

So it was a big surprise that, as we set off down the hill, she suddenly lost confidence,  wobbled, slammed on the brakes and flew over the handlebars….

Here she is, after several handfuls of painkillers and a trip to the local clinic. She landed on her shoulder and cracked it.

Luckily, I’ve been riding a bike all my life, so I wasn’t expecting any problems.

Here are a few pics from my cycle ride:

The cycle path from Locking to the studio, which is opposite the Borough Arms, is fairly flat until you go under the dual carriageway, then over the 2 hump-back bridges. 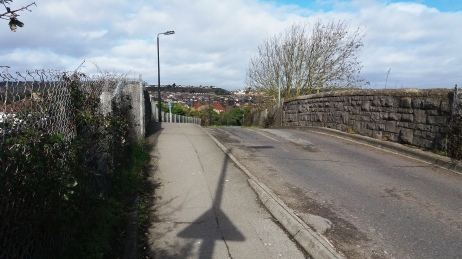 The first time I drove into Weston was in 1990 was when the other half had been posted to RAF Locking and I was following on with the 2 toddlers. The 2 bridges formed part of the main road to Locking, and the dual carriageway didn’t exist – just fields. No Locking Castle or Weston village – just fields. How things change….

At the Pottery Studio

I arrived at Carantoc Studio without incident, and parked my bike among the multitude of pots in the garden. There were a few other ladies arriving for the class, including complete beginners like me.

After introductions, and a few basic instructions, off we went!

This was my first effort – a dog made from a push pot: 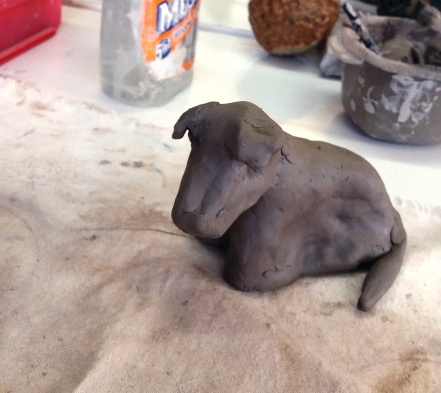 This is an early version. With a bit of help from Penny and suggestions from Adele, the person on my right, working on a cat bowl, it did get better…

It made my hands filthy though! 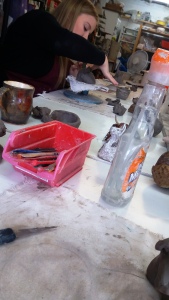 The 2 ladies to my left were concentrating on making elephants from push pots.

The next masterpiece was a coiled pot, made from a base and clay sausages

Good job with the rolling pin 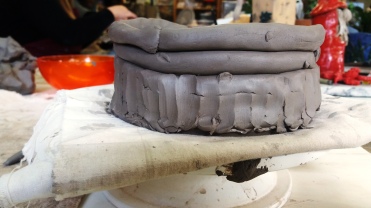 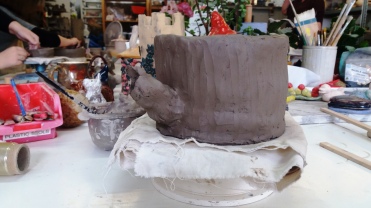 It was fun but all to soon, our 2 hours were nearly up. So I’ll need to go back to finish the pot, then decorate and glaze it.

As I got on my bike to ride home, I said goodbye to the ladies and pondered about whether I’d have a go on the wheel next time. Penny did offer to let me try, but apparently, it’s a lot harder than on the telly!

At least I got some exercise, although 16 minutes each way on a bike didn’t contribute much!

The bike ride didn’t really use much energy – maybe next time, I’ll walk! So here are my steps for today, including Bailey and Harvey’s afternoon walk.

Hope you enjoyed this week’s ramblings. As usual please leave any comments here.

See you next week.