This week’s ramblings come from a last-minute decision to take the dogs for a walk. I seem to remember the old fella and I made a last-minute decision to take the kiddies to this place once, nearly 25 years ago, which was the last time we spent any time in the town! We went there for an Indian meal a few months ago, which was very nice, but it was dark and raining, so we didn’t stop to look around.

The other half had worked near this town for nearly 10 years and I think he was seeking a nostalgia trip to the places he used to go on his lunch breaks. He suggested a walk along the beach with the boys, and then a mooch around the shops whilst they snoozed in the car.

But where did we go?

We negotiated the 15-mile drive without incident and parked in the car park of an unusually-large B&M store, which we remember used to be a supermarket.  The dogs were excited to be having an extra walk, and put on their puppy act as we crossed the road to the beach. To our collective disappointment – because, of course, Bailey and Harvey can read – the signs said, Dogs are banned on this beach. £500 fine! So we walked along the prom for about 1/2 a mile, where we could see dogs on the beach in the distance.

I don’t think I’ve ever been on the beach at Burnham. As we walked down the steps to the sand, I was wowed by the huge sea wall and steps. I’m sure I’d never seen them before.

Bailey and Harvey seemed to think it was a game and were constantly zig-zagging up and down the steps. Bailey’s going to be stiff and achy tomorrow, I said to the other half. These giant steps must be stretching his joints more than normal.

It was a bit of a grey day and so the view was shrouded in mist. We could just about see Hinckley Point to the left. Steepholm was to the right, looking larger than from Weston beach, even though it was further away. I chuckled to myself as I remembered the sketch from Father Ted, with the toy cows in the caravan.

I also never knew that Burnham-on-Sea had a pier! Well, it’s only a short one, but it had all the pier-type contents – burger bar, plastic tables, amusements….

We walked along a bit further, then wandered under the pier on the way back, with me wondering why lots of things seemed to be so big in Burnham…. 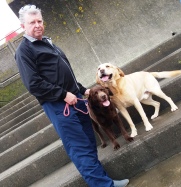 That was fun, Dad!

With the dogs collapsed in a heap in the car, we headed for the High Street, looking for a coffee. The first place we found was a pub, with a giant painting of a steam train on the side. 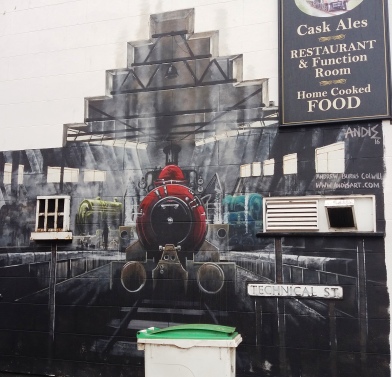 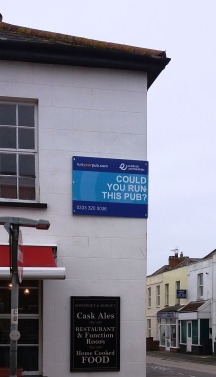 It looked like a good place for a coffee. It was nice inside, with rock memorabilia on the walls, but with hardly any customers. We asked for coffee, but the person behind the bar said, I’m sorry but the machine is broken. Damn! As we left to find another place, I noticed the sign outside, which said Could you run this pub? If I did, at least I’d be sure that  coffee was available!

We ended up in Subway with coffee and cookies. Not my favourite…..

To cut a long story short, not much has changed since John used to come here . There were about 7 card and gift shops, including the ones that had been there for 25 years and still looked the same. We spent a little time trying to remember what we’d bought from one of the gift shops all that time ago, without success.

Apart from the odd next-generation coffee shop, It was all very dingy and not very attractive. We reached the end of the High Street, to find the former Job Centre closed and a notice on the window:

We made our way back, on the other side of the road for variation. As we passed one of the  numerous shoe shops in Burnham, the penny dropped. The shops stocked giant shoes to enable the local giants to manage the huge steps on the beach, as well as high heels for a huge night out…… 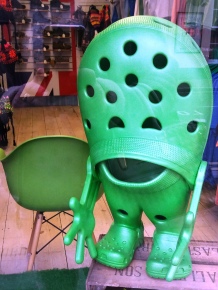 A giant night out?

In the fashion stakes, it seems that flares were de rigeur, and catered for the giant ladies, with very long legs!

As well as painting enormous trains on the pub walls, the giants of the neighbourhood had been indulging in a little post-pub vandalism, as – obviously, they were the only ones able to reach to nick the letters….. 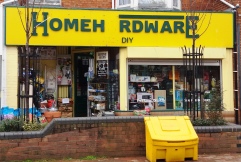 We passed one final surprise on the way back to the car – John’s real reason for wanting to come back to Burnham??

So there you have it; my regular 25-year trip to Burnham-on-Sea. Hope to see the place again in another 25 years!

So, we walked for 54 minutes, but, being in Burnham, I must have taken giant steps because there are less than 8,000…..

I need another 2,300 steps. Anyone for some walking on the spot?

Thanks for reading. Comments are welcome here

See you next week!